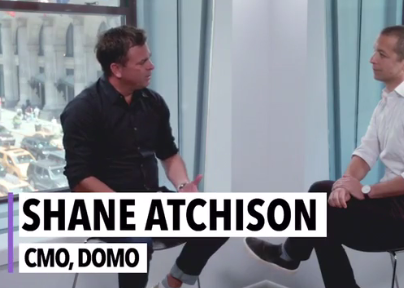 Last week, Adweek broke the news that the leadership of WPP’s digital agency Possible would be leaving for an unspecified “unicorn” startup following the announcement that it would be folded into the Wunderman network.

Yesterday, global CEO Shane Atchison named his new employer: it’s Domo, a business intelligence SaaS (software as service) company based in Utah’s “Silicon Slopes.” He will be CMO and Possible U.S. president Jason Burby will be chief customer success officer. In their place, Martha Hiefield is taking over as CEO of the Americas.

In an interview posted yesterday with LinkedIn’s Daniel Roth, Atchison called the move a natural one, given his focus on data and artificial intelligence at Possible.

We can’t embed the video, but you get the basic idea. Here’s the new CMO’s quote from the press release:

“I’ve seen first-hand what real-time marketing data can do to improve business outcomes at the world’s most valuable brands. The new way to work is about leveraging that same power across an entire organization to help all areas of the business improve and to keep organizations competitive. I’m thrilled to help tell the story of how the Fortune 50 and companies of all sizes are using Domo to change the way they run their business, and I’m looking forward to being part of the team Josh [James, Domo CEO] has assembled to capitalize on this massive opportunity as we help organizations realize the success of being truly data-driven.”

Again, it’s all about those numbers. Also worth noting that Atchison and Burby, who have founded more than one agency together, have known Josh James for some time and worked with him in the past.

Domo’s last fundraising round was this April, when it brought in $100 million. Current estimates value the company, which specializes in aggregating data from multiple sources like Facebook, Salesforce and Google Analytics, at more than $2.3 billion.