The campaign’s tone, calling for unity and an end to divisiveness, is perhaps slightly naive and out of touch with contemporary calls for widespread reforms to address police brutality and systemic racism, but the larger problem was the use of the “#alllivesmatter” hashtag.

That hashtag, and phrase, of course, emerged as a response to the #BlackLivesMatter movement and has been widely criticized for its willful ignorance and decentering of the racism experienced by Black Americans, and, as such, is widely viewed as racist.

Miami Ad School used the hashtag alongside #BLM (in reference to #BlackLivesMatter). 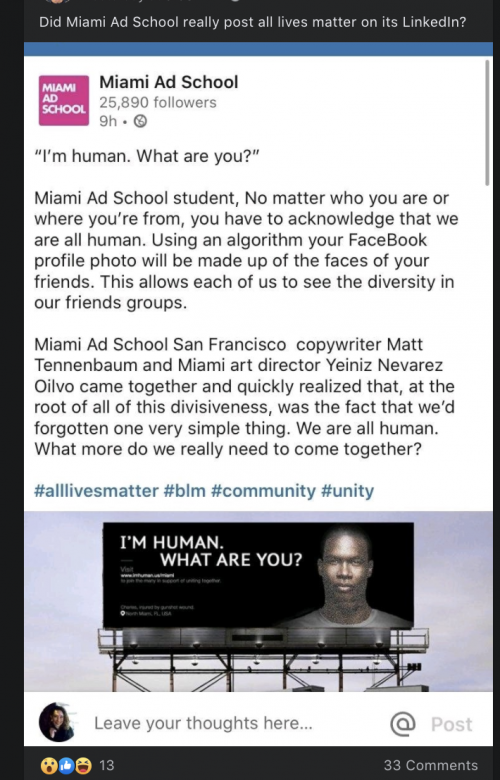 Miami Ad School was quick to delete the post. Yet, after it was shared on other social media platforms, copywriter and Miami Ad School alum Chamsseddine Abdelhafidh asked the portfolio school if they had really made the post.

Miami Ad School issued an apology on both its public LinkedIn page and a group for alumni, for the “harmful” messaging and failure to explain that “the campaign was about empathy,” but failed to address the use of the offending hashtag itself. In the apology, Miami Ad School also noted that the incident followed an internal discussion with students about its own culture.

Abdelhafidh replied to Miami Ad School’s statement, sharing what he considered the shortcomings of the apology, which didn’t address the use of the #alllivesmatter hashtag. He pointed out the problems of using a slogan “used to dismiss Black people’s suffering in a moment where the whole world is marching for equality” and asked what the school is actually doing to address its internal issues. 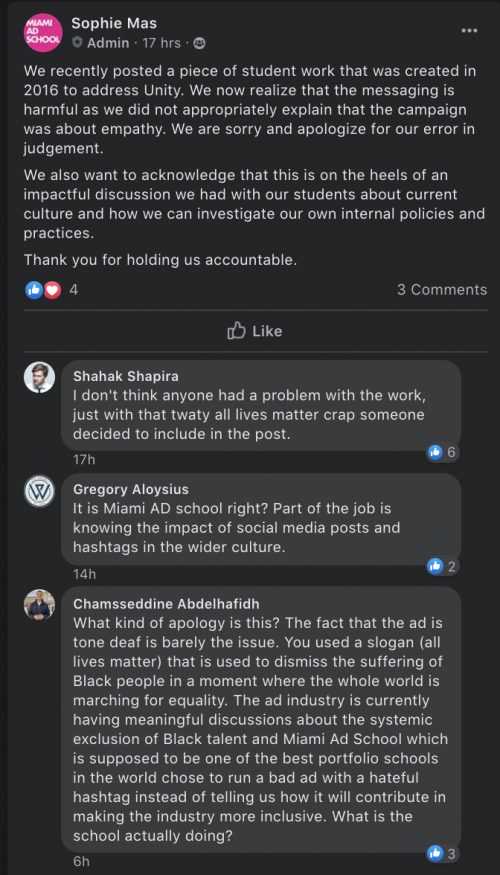 “When I posted that, I wasn’t trying to go for a ‘gotcha’ moment,” Abdelhafidh explained. “I was really trying to give them the benefit of the doubt, to see if they would act and come back with an actual, sincere apology and clear steps on how they would change their recruitment process or anything.”

In response, Abdelhafidh said he was initially blocked and then kicked out of the alumni group altogether. He explained that Miami Ad School founder Pippa Seichrest reached out to apologize to him, both for the post and his removal from the group, and explained that the message had been created by someone who was not American and didn’t understand the context or implication of the “#alllivesmatter” hashtag. (He said he has not been invited back or requested his access be restored.)

“It’s completely irrelevant who posted it. It reflects on the institution,” Abdelhafidh told AgencySpy, calling the explanation “more damage control.”

Abdelhafidh claims he responded to the email by saying that he appreciated the apology but felt the public deserved an apology for using the hashtag. He also told Seichrest that while he was open to providing insights, she should talk to Black ad professionals who could offer a better perspective. Abdelhafidh said he has yet to receive a response.

Update: Following the publication of this story, Seichrest shared the following statement:

No Lives Matter ’til Black Lives Matter, that’s what Miami Ad School believes. The use of #alllivesmatter should have never happened. Period. We are very sorry. We recognize, as a school, we have a huge responsibility to foster a culture that promotes anti-bias, anti-racism activism. We accept that responsibility and make no excuses. Miami Ad School is actively taking immediate action. To ensure a mistake like this never happens again, all staff and instructors must complete a mandatory DEI training program within the next two weeks. We are committed to providing access to quality education for anyone interested in the advertising industry. We will also continue to support our student-founded group, The District, which was founded by 3 African American students, advocates and brings awareness for people of color in a creative setting and provides a safe space for networking, relationship building, and community.

No apology makes up for the hurt our mistake caused, but we are dedicated to diversity, inclusion, compassion & empathy. We are actively pursuing these efforts and excited about the positive impact that will be made within our community.

Abdelhafidh said the issue arose when some are questioning the role of portfolio schools in perpetuating systemic racism in the ad industry. He added that, while he didn’t think the problem was specific to Miami Ad School, the institution is viewed as something of a “poster child for portfolio schools.”

“Portfolio schools have a huge responsibility. They’re either underestimating their responsibility or not taking it seriously, and something needs to the done about that,” he said. “It’s not good for the schools themselves, it might make them obsolete. It’s also not good for the industry because it relies on them hugely.”

“Every agency is looking at everything that’s happening and trying to change how they’re doing things,” Abdelhafidh added. “If Miami Ad School isn’t doing that, then there’s something wrong because they provide agencies with a big chunk of that pipeline of talent.”