At a time when agencies are being forced to make difficult decisions that strongly impact employees lives, communications around these decisions are extremely important. It’s easy for ambiguous sentiments to be interpreted as insensitive by those who have had their lives upended, even if those messages are sent with good intentions.

A message from DDB leadership following a round of layoffs and furloughs in its Chicago office provides an unfortunate example.

DDB Chicago went through a round of layoffs impacting around 30 employees across all departments, according to a source with knowledge of the agency’s operations.

DDB also implemented an unknown number of furloughs, salary reductions, structured retirements and deals to move employees to four-day and three-day work weeks, a source with direct knowledge of the agency’s operations told AgencySpy. The measures followed Omnicom CEO John Wren outlining a series of measures that would be taken across Omnicom agencies earlier this week, including layoffs, furloughs and salary reductions.

“COVID-19 has had a profound impact on our clients, our people and our partners across industries. We took several actions, including but not limited to salary and hour adjustments, furloughs, infrastructure changes, and lastly, after every cost-cutting measure, we have also had to lay some people off,” DDB U.S. president and COO Paul Gunning said in a statement. “These are times unlike any we’ve ever seen, and I am deeply committed to making every effort to get us through this and come out stronger.”

Near the end of the day, following the round of layoffs and furloughs, Gunning sent an email across the agency stating, “We have completed our tasks for today” and informing recipients he would see them on the morning Zoom call. 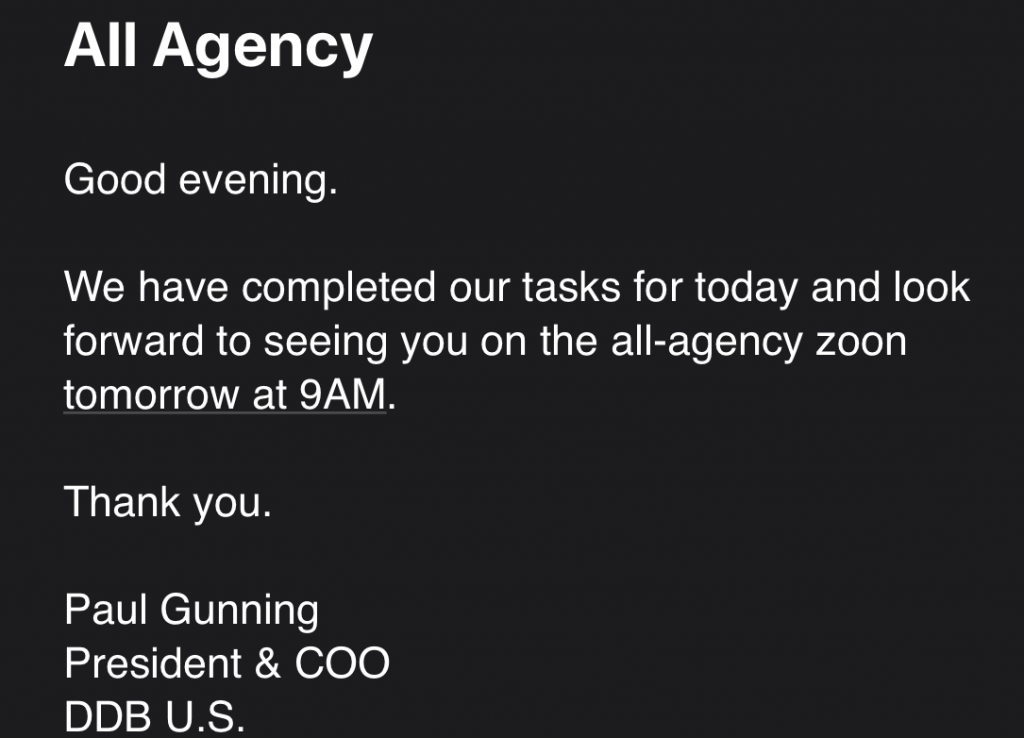 The intent of the email was to ease the tensions of employees unsure if future actions would be taken today after a particularly difficult day for the agency, while avoiding a detailed review of the agency’s measures for the day, a source with direct knowledge of the email and the agency’s operations explained.

However, employees impacted by layoffs and furloughs had not yet been removed from the email chain, a source with knowledge of the agency’s operations told AgencySpy, and received the email seemingly referring to their termination as a “task for today.” The source considered the terse language in the email extremely insensitive in light of the impact of the layoffs and potentially humiliating to former employees.

If you are/were employed by DDB and wish to contact us, please use the tip box in the upper right corner of the AgencySpy page or you can send us a private, encrypted message at agencyspymail@protonmail.com.