NEXT:Pepsi, GS&P and Cardi B Go Back to That Super Bowl Diner for Another Round
PREVIOUS:Duncan Channon Launches First Broadcast Campaign for Rakuten During Grammy Awards 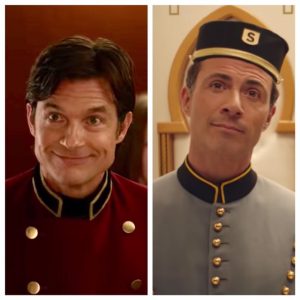 As this week comes to an end, it’s time to debunk(?) another ad industry conspiracy theory.

After every Super Bowl, it seems that we hear about a campaign that might just bear a striking resemblance to past work by another agency for another brand. This year, the spotlight fell on Hyundai.

You’re all familiar with the brand’s campaign, created by Innocean and starring Jason Bateman. The Arrested Development star played the operator of an elevator from hell, taking unfortunate passengers to all sorts of awful places like jury duty and a vegan dinner party before they saw the white light in the form of Hyundai’s Shopper Assurance service.

The ad went live on January 29, a week before the Super Bowl.

Earlier this week, a couple of people reached out to us noting that the effort bore some undeniable similarities to an ad released several months earlier to promote online mattress startup Saatva.

So yes, the two have a lot in common.

Both ads center on elevator boys leading our brave protagonists through multiple circles of hell before they arrive in brand nirvana, which comes with the sort of outstanding customer service that only these two companies can presumably provide. In the case of Saatva, sample dystopias include a man carrying his bed-box through the desert and—horror of horrors—a real-life mattress store.

One can understand the double takes. As one YouTube commenter put it, “Wow. A commercial so impressive even Hyundai was inspired.”

But both parties say that’s not true.

“We conceived the idea and clients approved our Hyundai ‘Elevator’ script for Super Bowl in late summer, well before the other content was distributed,” said an Innocean spokesperson. “Any similarities between the creative concepts are entirely coincidental.”

Joe McCambley, chief marketing officer of Saatva, agreed, saying the two campaigns were developed independently and that the likeness had to be a coincidence.

McCambley specifically told AgencySpy that he couldn’t imagine any creative team directly swiping an idea. And he should know—before joining the mattress-maker as chief strategy officer in 2017, he spent more than a decade in the agency world, serving as chief creative officer at Digitas from 1998 to 2001.

He confirmed that the company decided to rename the above YouTube file “Super Bowl Ad 2019” but said this was in no way a reference to Hyundai. In fact, the name change came about because Saatva made a regional buy during the game, which means some viewers saw both spots.

And both brands benefited in the end. McCambley said that all those searches for “Super Bowl elevator ad” led to a boost in viewership and visibility for his own company’s four-month-old campaign, and they didn’t even need to spend $10 million! He was so grateful that he thought about offering a free mattress to Hyundai’s CMO before his legal team advised him against it.