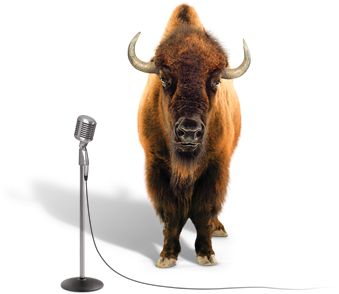 Catapult Marketing of Stamford, Connecticut is incumbent on the business, and we’re told they will defend. We do not currently have any additional information regarding the agencies invited to participate in the review.

According to the press release, “The review will seek to identify a best-in-class agency to deliver innovative brand strategies, breakthrough creative and digital capabilities, and performance marketing expertise for Frontier.”

Catapult and Frontier have been working together since 2012, and the agency created the brand mascot Frank the Buffalo. Here’s a brief case study regarding the relationship that the agency released last year.

…and here’s a recent broadcast spot.

The company specializes in providing broadband, telephone and other communications services to primarily rural areas in 29 states.

Frontier, which recently moved to expand its service area by acquiring assets owned by other telecom businesses like Verizon, announced earlier this week that John Maduri, a three-decade veteran of the industry, would become its new EVP of consumer sales, marketing and product.

A spokesperson for the consultancy, however, estimates the client’s annual marketing budget to be greater than $50 million moving forward.