NEXT:Agency Creatives Give You the Power to Put All Kanye News on Snooze
PREVIOUS:Friday Morning Stir

Just over a year ago, 72andSunny chief development officer Tom Johnstone became the latest in a series of agency executives to leave for the startup world.

So it’s a self-regulating travel coffee cup that helps you take better control of your personal time. And here’s the brand’s debut anthem spot, which aired today on Today.

You may have missed her, but the ad featured singer/songwriter Colbie Caillat. And its point was pretty clear: it’s always easier to take a little moment to breathe when your coffee or other beverage is just the right temperature.

“There are more distractions than ever and a higher demand on our time, which means it’s more important to take time to reflect or connect with the people that matter,” said Johnstone in the release. “Cultures all over the world have built rituals around hot drinks, and Ember can play a role here, because our products give people more time with their drink at the perfect temperature.”

The Today partnership included a bit of social sponcon. 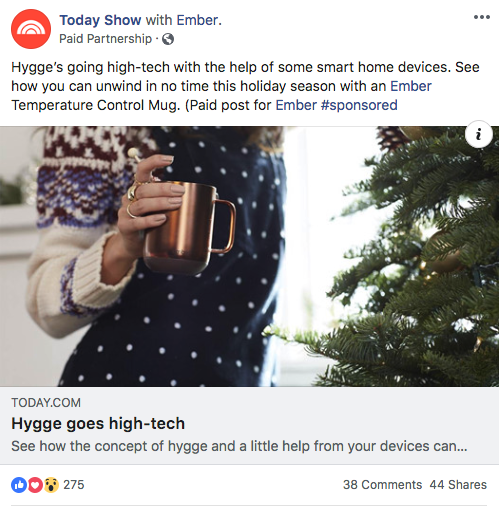 Joe and Nick Jonas believe in this disruptive technology, and they’ve never steered us wrong before.

Now you can talk about how your agency would have done it better.