This is a guest post by Matti Yahav, vp of global marketing at SodaStream. 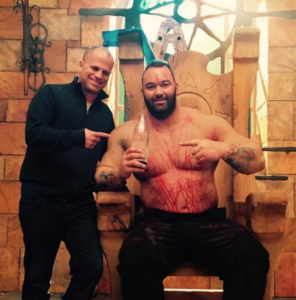 Even as a young man I was always ever the marketer and would stay up all night at my home in Israel to watch the Super Bowl—not just for the game, but for the most inspiring ads in the world.

I’m not alone when I say that Super Bowl commercials have been the Holy Grail of marketing creativity and is the one time a year that Americans and people around the world will actually tune in to watch what brands have to say.

Recently I’ve come to realize that this has changed. April Fool’s is now the period to watch. Sure, the biggest brands and agencies show off their goods for the Super Bowl, but it’s really for the deepest pockets, not for the most creative and brightest. April Fool’s has proven this year, and in years past, to show off a brand’s creativity and ability to connect with audiences more than even the Super Bowl.

Social media has become the world’s town hall, and that has never been more apparent than when we look at what brands have pulled out of their creative hats to tap this previously unused consumer event.

I know that you might be wondering why I’m comparing silly April Fool’s pranks to the Super Bowl, which features multimillion-dollar ad campaigns with the biggest talent in the world both in front of and behind the screen. Well, because now we have to stretch our creative muscle to break through on social media, go viral, and get through to the media. With this type of ad it is less about deep pockets and more about creativity and disruption.

The prize for the winners of the best and most successful April Fool’s ads are getting bigger every year. Not only are brands basking in the viral impact on social platforms but also the media joins in the fray providing coverage on the best and the worst.

We at SodaStream have launched campaigns for the past three years on April Fool’s, and we’ve made it to many round-up lists and earned dozens of millions of views. While there is no secret formula to creating a successful April Fool’s campaign and there is absolutely no assurance that our next video will succeed like the others, I think it’s a good time to take a look at these campaigns and reveal some of our learnings from each.

Consider the Element of Surprise

We wanted to deliver the message that it doesn’t make sense to carry heavy bottles of sparkling water from the supermarket when you can make it at home with a SodaStream. To do that, we made up a fake brand (HeavyBubbles) and invited the world’s “strongest” brand presenter (Thor Bjornson a.k.a. The Mountain from Game of Thrones and the World’s Strongest Man). Featuring The Mountain, an iconic character, in a such a new and entertaining light was really the surprise element here. The juxtaposition of how audiences viewed The Mountain, versus how he was presented made this video reach 40 million views in 48 hours.

In our NanoDrop campaign, we partnered with Paris Hilton to advocate using tap water instead of plastic bottles.  One of the things we try to do with these campaigns is to really plug into what is top of mind with people, and in this case, we wanted to address all of the news coming out about plastic waste. We are very committed to challenging this global problem already, but it is also relevant to what people are hearing in the news as well.

Don’t Take Yourself (or Your Brand) Too Seriously

In our latest video, we partnered with Bed Bath & Beyond and launched another fake product, SodaSoak–a new way of bathing in sparkling water. This video reached many top April Fool’s lists and gained brand exposure worth many millions. As marketers, we sometimes take ourselves too seriously, but if you want to play in the April Fool’s arena you need to have a sense of humor and allow yourself to put your brand in situations that make you squirm a bit.

I have to admit that it took me a long while to approve the strawberry bath scene.

It’s About Breaking Through

These campaigns are part of the marketing strategy and one that our CEO (and my boss) Daniel Birnbaum is leading—a concerted attempt to be disruptive and engage in guerilla marketing.  Online video has become a primary driving force for SodaStream, and our playful and PR-driven content secured us hundreds of millions of views, hundreds of thousands of shares in the past three years.

But much more important than that, we’ve earned brand heat and strong business growth. With the amazing results we are seeing from these campaigns, don’t hold your breath for a SodaStream commercial at the next Super Bowl.

Once a year I still wake up in the middle of the night to watch the Super Bowl and hope to do it with my kids for many years. But, for real innovative marketing inspiration, I’ll wait for next April 1st.