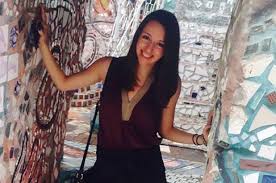 Byington had served as a marketing research project manager at Engine Group since 2016 (Image source: Facebook)

An employee of Engine Group’s Princeton, N.J., office has been arrested on charges of murdering a co-worker in June, authorities announced today.

Saal was apprehended by police on Wednesday and charged with both first-degree murder and third-degree possession of a weapon for unlawful purposes. Middlesex County prosecutor Andrew C. Carey and chief Fred Tavener of the Plainsboro Police Department announced the arrest today in a statement.

Byington was found dead in her Plainsboro, N.J., apartment on June 10 after concerned Engine employees asked the police to check in on her when she did not return after going home for lunch. ABC7 New York reported that neighbors had heard faint screams coming from the apartment and what sounded like furniture moving but did not see anyone exit the building.

“I sincerely thank and commend the many dedicated members of law enforcement who have worked tirelessly to solve this homicide and apprehend the defendant,” Carey said. “The investigation has been a top priority since the crime occurred. I hope that the arrest brings at least some sense of peace to the friends and family of Carolyn, as well as the greater community.”

Those with any information about the crime are asked to contact detective Tim McMahon of the Plainsboro Police Department at (609) 799-2333, ext. 1627, or detective David Abromaitis of the Middlesex County Prosecutor’s Office at (732) 745-4436.

In Byington’s obituary, the family noted that she was an avid volunteer for the Junior League of Greater Princeton and asked that donations be made in her memory to Weill Cornell Medicine’s Chiari Research.