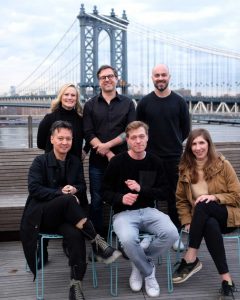 The formerly “by appointment only” agency created as an Apple-only Huge sister shop announced several new hires in New York this week, and it appears to have some interest in sharing its name with the world at large.

A helpful press release even listed some non-Cupertino clients such as Beats, Comcast and Goldman Sachs, though we already knew about the latter.

Here are the new hires, all of whom have two letters in common.

VP of advertising Marco Pupo was an ECD at McCann, where he helped lead Verizon and Unicef. The Brazilian has 15 years of agency experience at home and abroad, and his best-known project is Grey’s controversial “Gun Shop” stunt.

VP of product JoRoan Lazaro was an ECD at BBH New York who focused on design. He was formerly with CPB, R/GA and Barbarian, and he’s “an Internet OG” with experience working on early bloomers like SecondLife and AOL.

VP of talent Jean Jacques comes from FCB New York and Wieden + Kennedy, where she led human resources and listened to all you guys complain about your jobs. She’ll focus on bringing in talent so we write more posts like this one.

VP of strategy Luca Vergano formerly led the Carlton and United Breweries accounts at Clemenger BBDO Melbourne. He started as a copywriter and worked on Apple in the past (among many, many other brands), so he should be a natural fit at Elephant.

VP of strategy Paul O’Neill, on the other hand, headed up UBS for Publicis London before jumping the pond. A former law student, he worked on AKQA’s Cannes-winning Fiat eco: Drive, which also earned a place on the New York Times’ “Top 10 Campaigns of the Decade.”

VP of marketing & communications Emily Hodkins (hi, Emily!) was head of PR for Heat/Deloitte Digital after that organization’s acquisition. She formerly led comms for Anomaly and held similar positions at Droga5 and 72andSunny.

CEO Eric Moore, who lives in New York and takes a whole lot of cross-country flights, said, “We’re constantly seeking the best talent, because that’s what great ideas and great work require. When you work with the most iconic brands in the world, you have to operate at at the highest level.”

“Marco, JoRoan, Jean, Emily, Luca and Paul represent this caliber,” he continued. “They bring the creativity, culture and storytelling necessary to deliver on Elephant‘s mission of creating value for companies by creating value for people.”

Speaking of storytelling, we may see some new work from Elephant soon even though Apple remains the agency’s largest client. Most importantly, they still use a hashtag that will lead you toward a stampede of Instagrammable Proboscidea.