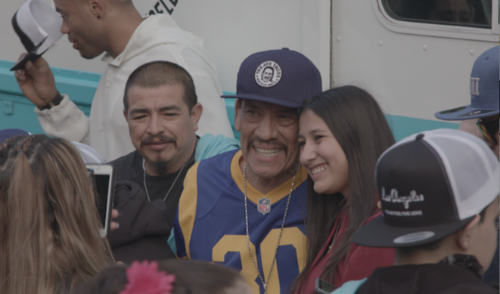 Danny Trejo stole the show as Marcia Brady in BBDO New York’s 2015 Super Bowl ad for Snicker’s. This year, he served up tacos.

With the Rams in the Super Bowl, independent agency The Many (which rebranded from Mistress earlier this year) decided to promote Los Angeles tourism by bringing a little bit of L.A. to Super Bowl LIII in Atlanta for Discover Los Angeles, in the form of Trejo’s Tacos.

The actor took a mobile version of the restaurant to Atlanta for the game, promoting the event on Los Angeles Tourism’s social outlets.

If you’re going to be in Atlanta for the Big Game, we’re throwing a @trejostacos Tailgate Party with @officialdannytrejo 🏈 Meet us at @nomascantina and The Elbow Room this Saturday and stay tuned to our Instagram Stories for more details. 🌮🌮🌮 #ComeFeelTheLove #ATLSB53

Presumably, the game was so boring that quite a few preferred to stand in line for tacos.

We’re out here spreading some L.A. love, Atlanta ❤️ Come meet us at the Elbow Room at 5pm to meet @officialdannytrejo and enjoy free @trejostacos 😎🌮🙌🏼🏈 #ComeFeelTheLove

The Many has worked with Discover for some time and created the 2017 “#EveryoneIsWelcome” campaign which included an event welcoming visitors to LAX in four different languages.