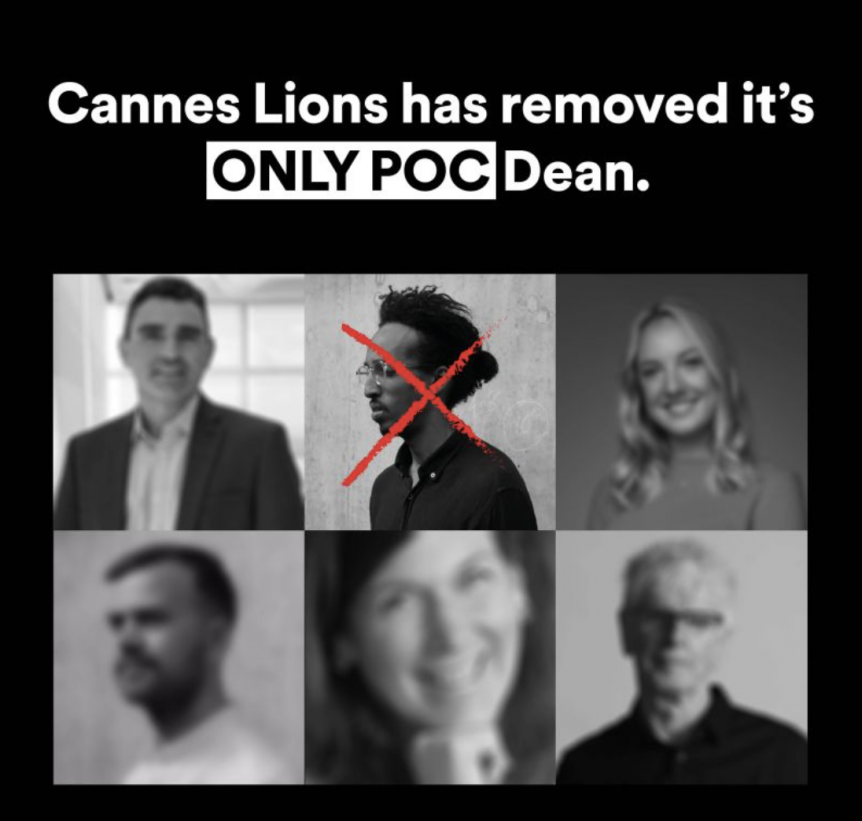 One of the deans of the Cannes Lions International Festival of Creativity has called out the organization on social media for its lack of accountability as it pertains to DEI.

Abraham Abbi Asefaw, chairman at LW in London and a dean of the Roger Hatchuel Academy learning program at Cannes, tweeted a long thread after being let go of his deanship, which he claims makes the remaining list of deans all white, since he was the only person of color acting in the role.

“After three months of silence from Cannes Lions since my last, constructive effort to hold them accountable as an organisation seemingly committed to DEI, I have now decided to share my experiences publicly,” Asefaw said to lead off his thread, which was also posted on Medium.

After three months of silence from Cannes Lions since my last, constructive effort to hold them accountable as an organisation seemingly committed to DEI, I have now decided to share my experiences publicly.
↳A thread

In the thread, Asefaw stated that he is disappointed in how Cannes Lions presents itself as an organization that champions diversity, but does not honor it in its actions. He wrote that in 2019 Cannes Media Lions launched its ‘most ambitious diversity and inclusion program to date’ in Inkwell Beach as a response to the fact that less than 2% of attendees were people of color or from underrepresented communities. As co-dean of the Academy, Asefaw sought to make it the most diverse place at Cannes Lions.

Now, however, Asefaw has been removed after he and his other co-dean ended their partnership. He stated he informed the management team at Cannes and suggested they choose just one dean for the program and for that person to be a POC, which he volunteered a shortlist. After eight months, he learned he was no longer a Dean. While Asefaw said he is fine not being a Dean any longer, he cannot handle the organization using a “quick fix” in choosing a replacement that was not a person of color.

Asefaw went on to write that people of color are tired of apologies and promises, and that change needs to happen.

“It appears that public pressure is the only actual tool POC have to create (read: force) change. I wish it was different, but as I am reminded over and over and over again, it is not,” wrote Asefaw, and requested that Cannes Lions change the hiring process by providing transparency now and in the future, and “rethink your conclusion for this year by aligning your hire for this role with your messaging around diversity for the programme overall. This means the final selection must allow for fair and open competition, considering all candidates and their experiences whilst ensuring it fits with the purpose of the programme.”

Cannes Lions first responded on the thread asking Asefaw to set up a time to “talk this through.” Cannes Lions later responded with its own thread on social media, with a public apology to Asefaw and the recognition that the organization needs to focus internally and a promise to do better.

We’re addressing everything @AbrahamAsefaw has said very intentionally, and welcome his criticisms to ensure a mistake like this is not made again. We’ve reached out to him, but would like to offer him a public apology.

Public response to Asefaw’s post thus far has been positive, with the likes of Walter Geer, Nicole Crentsil and Antoinette de Lisser, among others, expressing solidarity.

In the thread, Asefaw said he hopes through his posts that the community and industry will “come together to demand that Cannes Lions immediately, and moving forward, act in line with their long-standing promises and not be performative.”