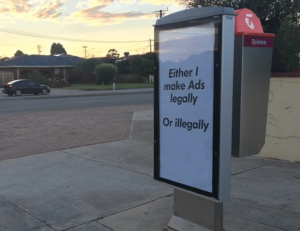 This guy didn’t put an (almost certainly temporary) tattoo on his face or write a bunch of songs dedicated to his favorite agencies. In a way, junior art director Chris Luu’s pitch is even more intense: he will make ads, whether the agencies where he applied hire him or not. But if they don’t, he might just have to do it illegally.

Luu’s medium of choice is phone booths. Plain old everyday booths with ads on the side. The Perth, Australia-based artist “hijacks” them using a security key, removes the boring old print ads within, and inserts his own art. He already scored some coverage in Vice for this extended stunt, which involves everything from a bouquet of flowers to his own photos and a meta “free telebooth keys” message.

Most of them stayed up for a few days, he said.

Anyway, Luu pulled the equivalent in order to stand out in applying for internships. Here’s his video documenting the whole thing for Droga5 recruiters’ eyes only.

This one was very specific to Droga5, as you can tell from the video itself.

“The idea was that one way or another, I’m always going to work ambitiously to make ads and that Droga5 would be the safest place for me to do it,” Luu wrote.

He said the whole idea came in response to a quote in which David Droga said, “We want to create a safe environment for dangerous ideas.”

“I do believe that being safe is a dangerous path in this world of reaching communication,” Luu continued. “Droga5 has my attention because not only are they thinkers, but they’ve proved themselves as fighters challenging the category norm through their work.” He also applied to intern at 72andSunny and BBH because he “strongly believe[s] they are two major agencies that share the same progressive and resilient style, which I hope to craft and learn from myself.”

It reminds us of a roommate we had in college who stripped ads from every bus stop in the general vicinity and turned them into graffiti exhibitions for our dorm.

So will this stunt get him hired? The three agencies have all declined to comment, but we have our fingers crossed! And don’t get arrested, dude.