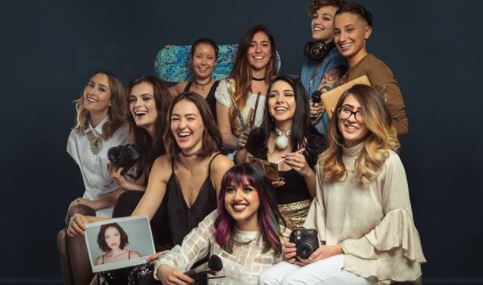 Like so many agency creatives, she wanted to organize a side project—in this case, one focused on contemporary fashion. The main problem was that existing resources like, say, Craigslist, weren’t quite providing the filters she needed to get that project off the ground.

DeLuca wanted to find some emerging talent in New York, but she ended up getting “a lot of messages from random men” that all too often consisted of variations on “come to my studio” invites.

She was understandably frustrated.

DeLuca said, “I wanted to work with another woman around my age and thought, how great would it be for women to come together in their [respective] cities to make their dream projects come true?”

In a moment of inspiration, she reached out to photographer and conceptual artist Heather Leigh Cullum, whose work she had admired on social media.

Together they launched The Passionate Project, which defines itself as “a space to collaborate towards a common goal, build friendships, inspire each other and help each other achieve your artistic visions.” So it’s essentially a networking group for creative women.

The project started with a photo shoot involving women in various creative fields who volunteered their time to get it off the ground.

Unlike #FreeTheBid, which is a very specific effort to allow more female directors to enter campaign pitches, The Passionate Project is more about facilitating exactly what its name implies: personal side projects by women with day jobs in different industries. So far it includes a website, an Instagram account and a Facebook page. She said that she may eventually create a private Facebook group when the community grows large and active enough.

The TBWA organization is not directly involved in the project, but DeLuca said one of her global creative directors was so impressed that he got the agency’s communications team involved. DeLuca has also received tips and support from some industry stalwarts like Cindy Gallop and The 3 Percent Conference.

Her priority at the moment is growing the platform, but when asked about larger goals she said, “I really just want to help people. It’s very important to me to create a tool whereby others can benefit and infuse it with kindness and creativity.”

She encourages all female creatives to join, whether they happen to work at agencies or not.

*DeLuca left her job at TBWA this week.