NEXT:BVK, United Way Ask Viewers to 'Join The Fight'
PREVIOUS:5 Biggest Posts of the Past 5 Days 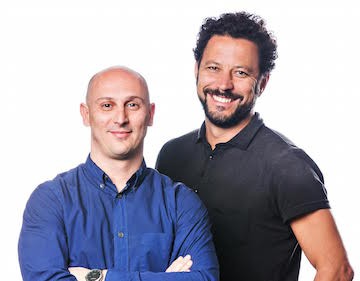 Anomaly’s Los Angeles office finalized its leadership lineup with the addition of Paco Conde and Beto Fernandez as partners and executive creative directors.

Paco & Beto are an art director/copywriter duo hailing from Brazil and Spain, respectively. They are best known for their work on the 2013 Dove “Real Beauty Sketches” campaign by Ogilvy Brazil, which went viral and helped the office win Agency of the Year at Cannes. (They also scored the Creativity Innovators of the Year award.)

The two most recently worked as group creative directors at BBH London, which hired them in late 2014 on the strength of the same campaign.

Of course, they’ve both done quite a bit more work during their 20-plus years in the agency world: Beto contributed to the Burger King “Proud Whopper” campaign during a brief stint at David Miami, and the duo also led Ogilvy’s football-focused “Security Moms” campaign. They’ve scored metal from The One Show, the CLIOs, D&AD, etc., and Cannes listed them among the world’s 10 most awarded CDs from 2013 to 2015.

But enough about their plaudits.

“Anomaly is one of the hottest companies in our industry,” reads the duo’s statement. “Their unique culture is attracting some of the best brands and briefs… Pair that with L.A., the place where everything is happening in technology, entertainment and marketing, and you’ve got a winning equation. If Anomaly and LA are amazing separately, imagine together! It’s an opportunity of a lifetime.”

The agency’s founding partner and CCO Mike Byrne said, “Paco and Beto, with all their accolades and achievements, act like they’ve never done a thing and have everything to prove. Finding this kind of humility and grit in this business is rare.” BBH London ECD Nick Gill thanked them for their hard work, adding, “[I] wish them every success in the future.”

After winning Beats just under a year ago, Anomaly went on a mini-hiring spree to staff its West Coast joint, later adding Diet Coke to its client roster.

So far, the work we’ve seen from the office has been limited to a couple of campaigns for Beats. But that will surely change.