With all due respect to the Strand, City Lights Books, Mr. B’s Emporium of Reading Delights (a real shop in Bath, U.K.) and others, Powell’s City of Books in Portland reigns supreme. This must-stop on any culture trip to The Rose City (skip Voodoo Doughnut), like its brick-and-mortar brethren, has struggled during the pandemic.

Fortunately, the landmark reopened with limited hours and shopping options during the summer. One outpost in the Portland suburbs opened in August and a third, in the city’s trendy, quirky Hawthorne District, opened last week.

“While this is still a far cry from Powell’s pre-pandemic, we are thrilled to have finally arrived at this moment and have more opportunities to connect readers with the books they’ll love,” Powell’s owner Emily Powell told Portland’s Fox affiliate last month. “We are hoping that we might be able to remain open in this expanded fashion after the holiday season and into the spring, but at the moment these are holiday season openings only. In this daunting time, we must proceed carefully.”

Of course, lingering heavily over the bookseller’s success is a certain tech/ecommerce/entertainment company based 180 miles north in Seattle. Reminding people of Powell’s independence and keeping it local, the brand enlisted Portland indie Opinionated to assure people that, yes, Amazon is going to do just fine. 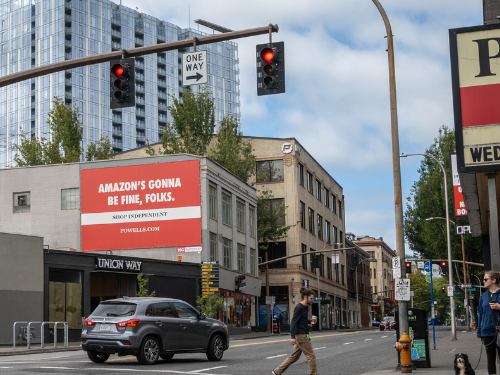 “[Powell’s] reached to ask if we wanted to help,” said Rob Palmer, ecd at Opinionated. “All of us have a lot of passion and love for that place, so of course we knew that we were going to help.”

The punny OOH written by Scott Fish, is one crucial cog, but the agency decided to take it one step further, getting into the sensory space with a perfume that puts you right in the middle of millions of books … and wood … and maybe set two of The Dead show at Paramount Theater, July 1972. This is Portland, after all. 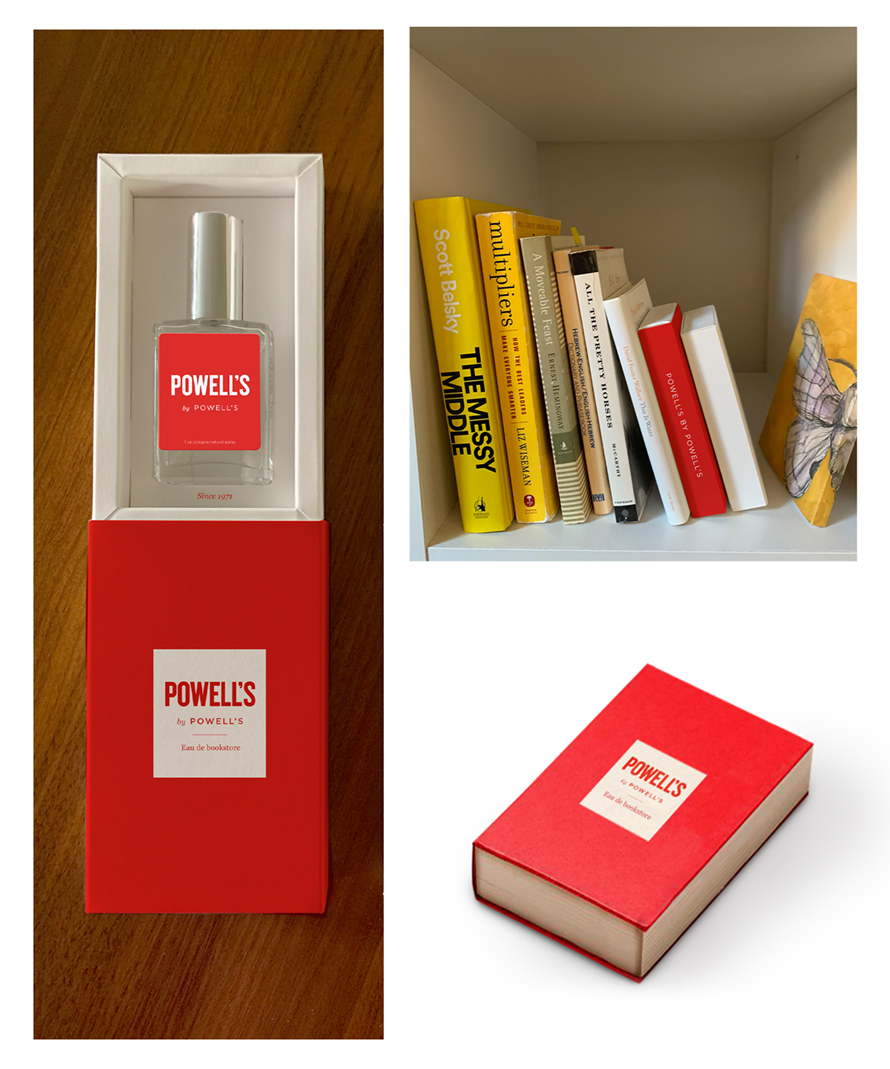 In all seriousness, the idea is: if you can’t shop there in person, you can at least get a whiff of Powell’s when you receive your online order.

“Everybody talks about the smell going to Powell’s,” remarked Palmer, who (nonsequitur alert) worked on Van Halen’s “Right Now” video during his time in L.A. “It was one of those first ideas that we came across. And it’s ridiculous, but it never went away.”

One for the copywriters, the deliciously eccentric copy (from the Archie McPhee school) instructs people on how to wear it:

This scent contains the lives of countless heroes and heroines. Apply to the pulse points when seeking sensory succor or a brush with immortality.

“The right idea for Powell’s needed to help move the needle from a sales perspective without sacrificing creativity,” said Emma Siolka, who wrote the perfume copy. “And beyond being clever and (so far) effective, Powell’s by Powell’s is a solid reminder that physical places and experiences are what make Portland, Portland.”

The one-ounce, limited-edition bottle retails online for $24.99 and is described as having notes of wood, violet and Biblichor (which refers to the smell of old books, though we stand by that Dead comment).