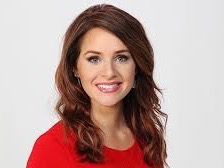 Kristi Leigh‘s “childhood dream” job was to be the evening news co-anchor at WTOL. Now, after three years, she is moving on.

Leigh will join Fox affiliate KMPH in Fresno, Calif. Her last day on the air in Toledo is scheduled for Friday, February 14 before she hits the airwaves of the Sinclair-owned station.

“This is a decision not taken lightly,” said Leigh, who continued, “something started stirring inside me that maybe I should make a change. I thought about it for a long time. It took me months to finally make the decision.”

A graduate of Bowling Green State University, Leigh was born in Toledo and has never left the market.

Kristi Leigh’s start date in Fresno is slated for March 16.