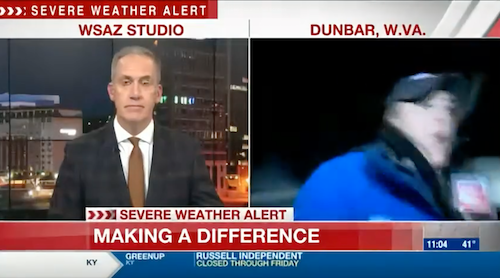 WSAZ reporter Tori Yorgey was hit by a car while doing a live report for the Huntington, W.Va., NBC affiliate.

Morning anchor Tim Irr had just tossed to Yorgey when a car turned into her and she suddenly disappeared from screen. Her mic, however, was still working.

Yorgey then came back into frame and spent a few minutes trying to reassure Irr, the audience and some bystanders who saw what happened that she was OK. Yorgey also revealed this was her last week at the station and that she had been hit by a car while she was in college.

“I don’t even know, Tim, my whole life just flashed before my eyes but this is live TV and everything is okay,” she said after Irr asked how she was hit. “I thought I was in a safe spot but clearly we might need to move the camera over a little bit.”

We asked WSAZ about Yorgey’s condition, but haven’t heard back.