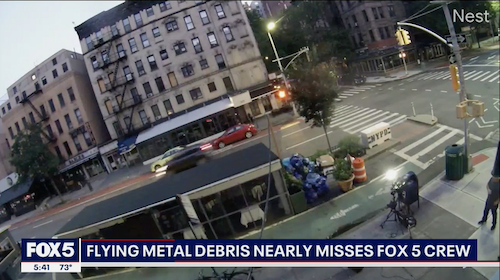 WNYW photographers Tim Daughtry and Paul Barnathan, along with reporter Raegan Medgie, were getting ready to go live for Good Day New York on Manhattan’s Upper East Side when they were almost hit by a flying piece of metal yesterday.

The Fox owned station says a flatbed truck driving through the intersection of 78th Street and 2nd Avenue hit “a pothole or a manhole cover or something,” and sent a piece of metal skyward.

Both she and Barnathan got out of the way of the ricocheting piece of shrapnel, which hit a wire before leaving an inch-deep crater in the sidewalk.

“Thank God for that wire that it hit,” Daughtry said, “because more likely my reporter and the cameraman would not be here today.”

WNYW also noted the NYPD’s slow response to the incident.

The NYPD told Fox 5 NY police responded to a 911 call of a vehicle driving recklessly at 78th Street and 2nd Avenue and marked the job “gone on arrival,” later responding to Medgie’s second call five hours later and recording an accident and complaint report for the truck leaving the scene of an accident.

Human nature likely dictates that close calls receive less attention and incite less change than do tragedies. Having video of this near-catastrophe and Fox 5’s closeness to the characters involved brought it to our attention sooner than had we not known the near-victims. But as Medgie reminded us, the catapulted piece of steel on the Upper East Side Thursday morning threatened everyone and anyone in the vicinity of that busy block, in one of the world’s great walking cities