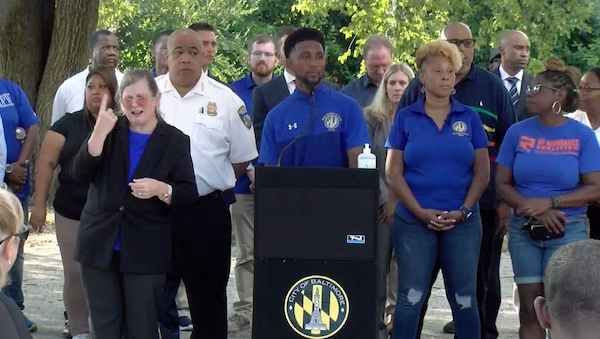 During an August 2 press conference held by Baltimore mayor Brandon Scott, WMAR reporter Dave Detling asked a question about young black men carrying guns that was immediately called out as racist by the mayor.

Detling was asking about a murder involving squeegee workers and a man named Timothy Reynolds. A squeegee worker is a person who cleans driver’s windshields while they wait for the light at intersections. WMAR said Detling no longer works at the station.

“To the young black men who may be watching, listening, who you may be interacting with, what do you say to them and their parents—some who may be squeegee workers, the teens I am referring to—who are knowingly and actively carrying illegal weapons either for protection or to commit another crime, what do you specifically say to them?” Detling asked Scott.

“Well, I would say that people in general carry guns, Dave,” said Scott. “I wouldn’t say that we should limit it to young black men. That’s …”

“We’ve seen they’ve admitted to it,” replied Detling. “For protection. So in relation to the squeegee workers …”

“I think that we have to be very careful, Dave, when we’re talking about saying that guns are only in the hands of young black men,” said Scott. “Many of us would see that as racist.”

In response, the Baltimore Association of Black Journalists issued a statement saying it “watched with dismay” as an industry colleague asked a question “that had racist undertones.”

The BABJ went on to say, “While we are aware of the statement that Mr. Detling’s employer at the time, WMAR-TV, released in response to his comments, including the fact that he is no longer employed with the station, we are still concerned with the continual misrepresentation by media outlets including those that some of the members of our organization are employed by.” 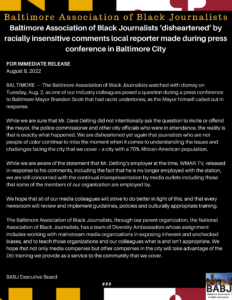 The station also issued a statement saying WMAR and Detling “regret the phrasing of the question.”  You can read the complete statement below: 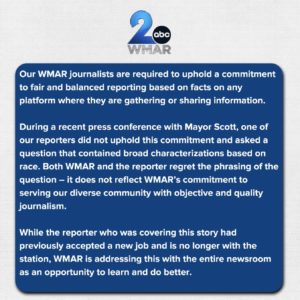 Detling had worked at the station since 2020. There’s no word where he’s heading next.