NEXT:WCNC News Director Heads Back to Atlanta
PREVIOUS:New York's Local News Is Being Anchored From Los Angeles, a Result of Coronavirus Infections 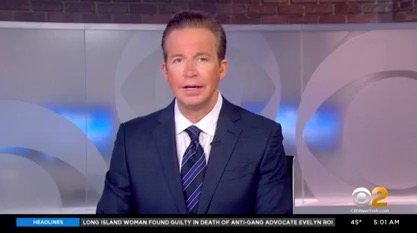 After hosting WCBS‘s morning show solo from a single anchor studio in New York, Chris Wragge talked to TVSpy about the current conditions at the CBS Broadcast Center which has been shut down.

As TVSpy reported, Wragge woke up to go to work today, but the studio where he normally broadcasts from, alongside Mary Calvi and Elise Finch, was shut down. On Wednesday, it was revealed that two CBS employees had tested positive for the coronavirus, which led to CBS shutting down the block-long Broadcast Center on West 57th Street in Manhattan. Today, a third employee tested positive for the flu.

Wragge anchored the entire show, which started at 4 a.m., solo from the CBSN New York studio. As TVNewser reports, CBS This Morning moved its show to Washington, D.C. The WCBS morning cut-ins were replaced by national updates from CBSN.

As of now, Wragge will not be in tomorrow, and it’s not clear where the morning show will broadcast from. Inside Edition, which is also produced from the Broadcast Center, originated from Deborah Norville‘s kitchen.