NEXT:While Other Philly Stations Go All-In on Eagles Super Bowl Win, WCAU Sticks With This Is Us
PREVIOUS:Buffalo, Not Philadelphia or Boston, Is Top Market for Super Bowl LII Viewership 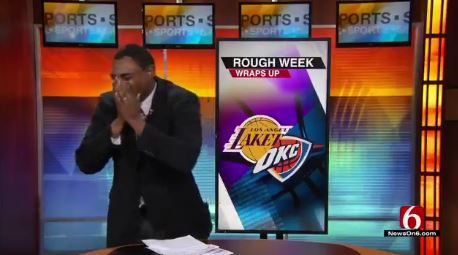 Harold R. Kuntz is a sports reporter and anchor for KOTV in Tulsa. But he’s also a Philadelphia Eagles fan. A huge, emotional Eagles fan.

“Okay, late breaking…,” anchor Scott Pfeil said, before being interrupted by a jubilant Kuntz who was in the studio ready to lead with the Lakers-Thunder game. Kuntz tried, but couldn’t get it together. So they went to commercial break. “My apologies for that impostor back there named Howard. I’m Harold,” Kuntz joked as he returned from the break, with the Lakers-Thunder highlights.

That moment I surprised @HaroldRKuntz3 on air that his beloved @Eagles finally won the #SuperBowl . Congrats man! #FlyEaglesFly pic.twitter.com/LnoEoJaIJ5