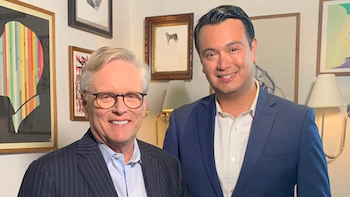 KXAN said he is the longest-serving news anchor in Austin. Hadlock’s first appearance as an anchor at the station was on August 29, 1990.

“It can feel like a thousand years ago or just yesterday, depending on the situation. I’ve had a great time working here. It’s a great job in a great city,” said Hadlock.

His replacement is political reporter Daniel Marin (right) who has worked in TV news for 15 years.

“I’ve had every job in the newsroom,” Marin said in a conversation between the two posted on the station’s website. “I’ve produced the newscast, I’ve edited the video, I’ve reported, I’ve anchored.”

“Same with me. Gotta work your way up,” replied Hadlock.

“It’s a weird feeling to be stepping away, but I think the time has come and I’m very happy for you to get this position,” Hadlock told Marin.

“Robert Hadlock—on behalf of KXAN, on behalf of Austin, all of Central Texas, all of our viewers. Thank you so much for everything you did for 32 years—your service to our community,” said Marin. “It’s not going to be the same without you.”