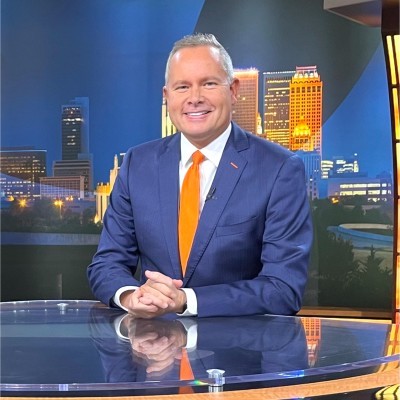 The news was first reported by FTVLive and confirmed by a tweet from Mike Collier, the chief meteorologist at KJRH, Boone’s former station.

“Just heartbroken,” wrote Collier. “My best friend, Clint Boone passed away today. Please pray for him family and his TV family at @NewsOn6 and @KJRH2HD.

Boone started working at the Tulsa, Oklahoma CBS affiliate this January. He’s worked in Tulsa since 2014, first at ABC affiliate KTUL and then at NBC affiliate KJRH before joining KOTV.

Below is the full text of a Facebook post from Collier talking about his relationship with Boone:

I’m truly heartbroken. Clint was one of my closest friends in life. He was the kindest and sweetest soul.

I first met Clint at Channel 8 when he became our 4 PM meteorologist. We instantly became best friends. We would meet once a week for lunch at Rib Crib. When the economy took a turn for the worst, he was laid off from 8. He lived with my wife and I for about a year. We had the time of our life while he transitioned to his next adventure on air in Fayetville. He and I would play tennis almost daily, and he would even cook for us! What a guy!

I tried so hard to get him to come back to Channel 8, and sure enough he joined us once again around 2015. I then jumped over to Channel 2 and asked for him to come join me and he did. He recently made a business decision and went to Channel 6. I put business aside and put friendship first. We were just too close of friends to let something like that get in the way.

I’m just so in shock and heartbroken, but I know he is with Jesus and in peace. He was a true Christian man. I loved him dearly. Although I will miss him and our tennis matches (I never ever beat him once

) I’m looking forward to the day I get a chance to play against him again.

Please pray for his family and all the television family that loved him so much. M