KING, the Tegna-owned NBC affiliate, took the top spot in social ratings in the Seattle/Tacoma market.

Share Rocket data shows KING has a 33.2 Share in the past 30 days and generated just shy of 1.9 million total engagements. That’s close to 500,000 more than KCPQ that took second place.

The Tribune-owned FOX affiliate got bumped to second place with a 25.2 Share and KIRO, the Cox-owned CBS affiliate, came in third with a 24.5 Share. KOMO remained in last place 17.1.

KING’s main Facebook Page has the largest Audience of any social account in the market with more than 834,000 followers and it generated about 88% of the station’s total engagement in the last month. KING also led the market on Twitter with a 32.5 Share as a group, a +16.3% improvement compared to the previous month.

Overall, the No. 1 individual in the market was KOMO anchor Eric Johnson with a 0.96 Share. He soared up the rankings after his total Engagement increased by +600% compared to the previous period thanks to his Facebook posts. Of the 57,319 total Engagements he generated in the month, 57,009 came from his Facebook Page. His biggest post was this story about a community that came together to celebrate the birthday of an often-overlooked coffee stand employee.

The Handford Nuclear Reservation tunnel collapse helped boost KING’s Susannah Frame on Twitter. She increased her Audience by +25.7% on the platform over the 30 days. 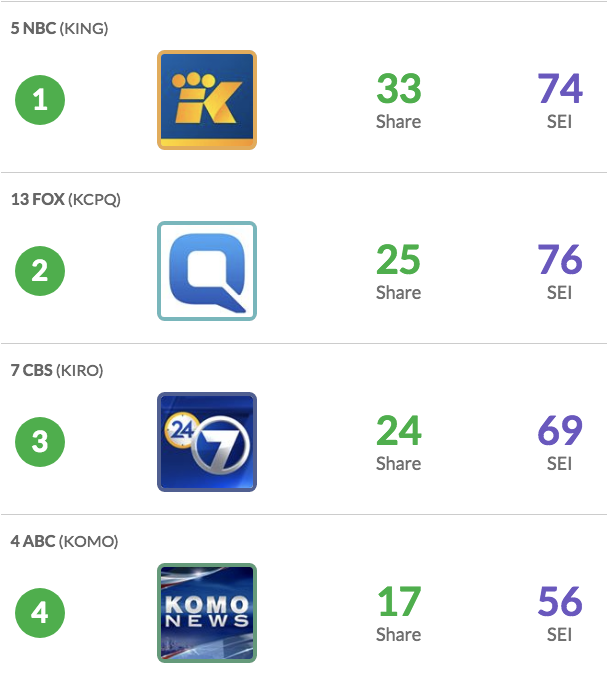