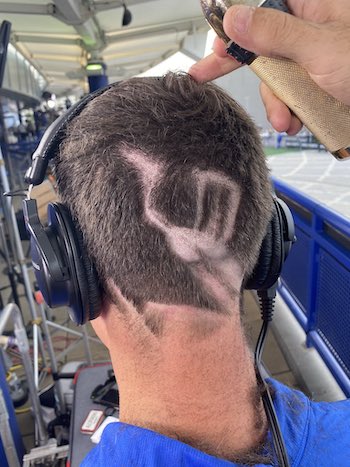 He brought in master barber Sean Rivera who was supposed to shave a lightning bolt into his hair. Instead, he got the kind of haircut you see when you lose a bet or a best of seven series. It was so bad even Jimmy Fallon noticed it.

“Now he’s just going to support the team by wearing a hat for the next three months,”  said Fallon.

Tampa Bay reporter @WFLAJosh showed his @TBLightning team spirit by getting a lightning bolt shaved into his head. #FallonTonight pic.twitter.com/Qc0Olop1PY

Here’s Benson’s tweet trying to make lemonade out of his hair shaped lemon:

It may not be a lightning bolt, but it’s something. ⚡️⚡️⚡️Sound off on what it *could be*. All answers accepted. #GoBolts pic.twitter.com/qMwV4RDXXW