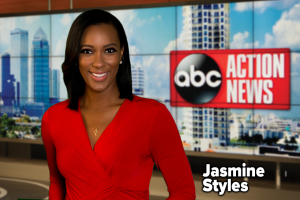 Jasmine Styles is joining Cincinnati ABC affiliate WCPO as an anchor and reporter.

Styles comes from Scripps sister station WFTS in Tampa, Fla. She’ll anchor the 4 and 5:30 p.m. newscasts in addition to reporting Monday through Friday.

“Jasmine is a strong anchor and journalist with a proven track record of connecting with communities,” said Jeff Brogan, vice president and general manager at WCPO.

Styles has been at WFTS since 2017. Before that, she worked in Columbia, S.C. and Beaumont, Texas.

She told the station she’s never lived in the Midwest and is looking forward to immersing herself in the culture, “digging into the food and making new friends.”