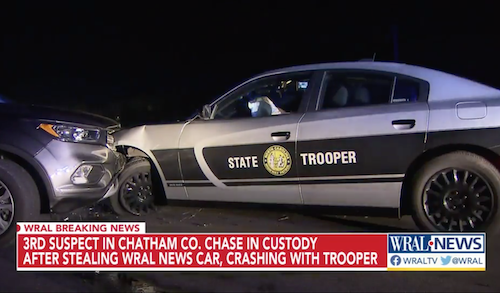 No one was hurt after a man stole a WRAL news car and crashed it into a North Carolina state trooper’s cruiser after a chase last week.

The suspect responsible for the crash was wanted in connection to a high-speed chase that happened the day before.

Reporter Keenan Willard and photographer Lucas Nelson were wrapping up an 11 p.m. report about the previous chase for the Raleigh-Durham, N.C. NBC affiliate when they were approached by the man, who offered the two cash for a ride to a nearby gas station, WRAL reported. After Willard and Nelson declined, the suspect jumped in the car and drove off.

A trooper saw what was happening and took off in pursuit. The chase lasted about five minutes before the suspect crashed and was arrested, the station said.

Here’s video from the station’s report: