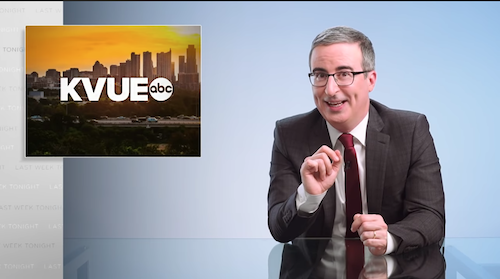 Two of the local stations skewered in a Last Week Tonight With John Oliver segment about paid content masquerading as local news gave TVSpy pretty much identical explanations when responding to our questions about the episode.

In case you missed it, Oliver’s weekly HBO show invented a fake product complete with a fake website and then went looking for local stations to report on it. Three stations took the bait—and HBO’s money—to conduct interviews about the Venus Veil, which was touted as the “world’s first sexual wellness blanket.”

Oliver then used them as examples in a story criticizing local stations’ paid content practices.

When we asked the stations about it, two of the three responded by telling us while they agree better care must be taken to check the veracity of claims made on the show—like whether the Venus Veil was real—they also pointed out that neither station showed the made-up product on a news program and that the segments were demarcated as sponsored content.

“Our non-news shows were created to help support local businesses and entrepreneurs who are looking for new ways to market their products, and we believe our viewers understand the differences,” the statement continued. “We are vetting our review processes for non-news segments to ensure our stations follow the proper standards.”

In its show description on the station’s TV listings, Mile High Living is described as “a business show offering different ways to save so that you can get the most out of your mile high living! We also cover community and lifestyle!”

Yesterday, when we published the story about its show’s hijinks, KVUE said pretty much the same thing. “‘FYI Austin’ is a two-minute commercial spot that is not a part of the KVUE newscast,” a spokesperson said. “It was an error to air this spot, and we are reviewing our processes, so this doesn’t happen again.”

We asked Last Week Tonight about it, but haven’t heard back.