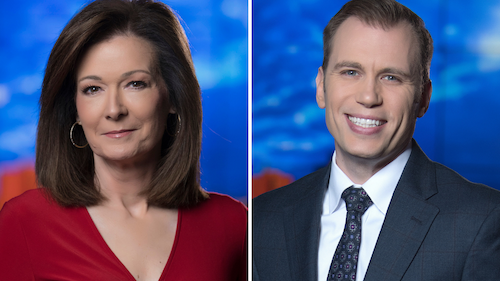 St. Louis NBC affiliate KSDK is bringing back its noon newscast on Oct. 4.

The show will be anchored by Kay Quinn and Ryan Dean (pictured), along with meteorologists Jim Castillo and Tracy Hinson.

Dean anchored the previous version of the newscast, which was canceled in 2017 because the station found more people were getting their news from social media than from broadcast TV. He said he’s honored to share the anchor desk with Quinn for the new program.

“She’s the gold standard in local news,” said Dean. “Our goal is to provide great content and context to our viewers. We understand your time is precious. Thank you for trusting us.”

Quinn leaves open a spot on the 5 p.m. newscast, and weekend morning anchor Kelly Jackson will step in as her replacement as co-anchor of the 5 p.m. news. Jackson, who will continue hosting the morning show on KTRS radio, has accepted the assignment on an interim basis while she can make sure she can balance a number of her professional commitments.

“Kelly has demonstrated time and again in her 20 plus years at KSDK that she understands our market and believes in the people,” said director of content Carol Fowler. “Her ability to connect with St. Louis with poise and credibility is unmatched.”

In other programming changes at the stattion, the show 5 on Your Side at 10 a.m. will be replaced by a daily magazine show, Show Me St. Louis, hosted by Dana Dean.