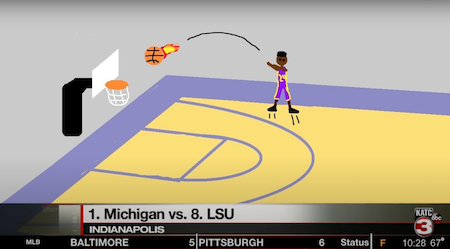 KATC sports anchor Andrew Clay joined a long list of local anchors who got creative to show viewers a sports game without actually featuring any footage from the event.

The challenge for the Lafayette, La. sports director, who serves as the station’s primary sports reporter and weekend sports anchor, was to feature highlights from Monday night’s match between LSU and Michigan in the second round of the March Madness NCAA Men’s Basketball Tournament without using any game clips.

Clay, who called the NCAA’s rules on showing highlights “complex and antiquated,” found a workaround. “They don’t say I can’t open up MS Paint and go to town,” he said.

And go to town he did.

Clay drew out the game on the antiquated software to depict players making shots. He even captured the joy of fans in the stands. Watch the video below to soak in the artistry: