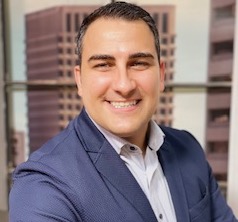 Sinclair’s president of broadcast and chief advertising revenue officer Rob Weisbord said Sinclair is “proud” to promote Gentile, who was previously the director of sales for Sinclair’s WSYX and WWHO stations in Columbus, Ohio.

“Franco has a proven track record of driving growth and leading teams in Baltimore and Columbus, Sinclair’s first two markets in our portfolio,” said Weisbord.

Gentile has a long history with Sinclair. He first joined Sinclair in 2004 as a local account executive at WBFF and WNUV in Baltimore before moving to Tampa in 2009 to launch the company’s Long Form Sales Division as corporate sales development manager. He was previously the local sales manager at WSYX-WWHO until being promoted to general sales manage in 2016.

“I am excited for the opportunity to lead Sinclair’s talented team in Omaha as Vice President/General Manager,” said Gentile. “Together, we will continue our commitment to serve the community, viewers, and local business owners throughout the area. My family and I look forward to becoming an integral part of the Omaha community.”