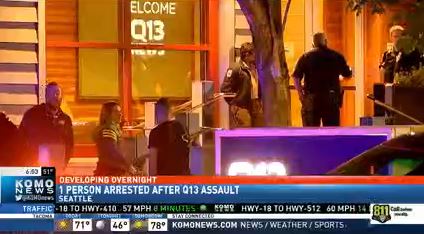 A security guard was attacked in the lobby of Seattle’s Fox affiliate KCPQ just before 4 a.m. this morning.

“Seattle Police arrived quickly and arrested a man believed to be the attacker,” the station reported on its morning show. The security guard was shaken up but will be okay.

The news at KCPQ was also reported by other Seattle stations including KOMO. Here’s how the story was reported on Q13.