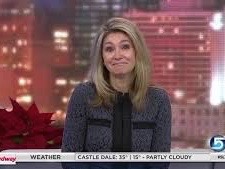 Salt Lake City anchor Lori Prichard has opened up about her husband’s sudden death in August.

This week, she revealed that her 44-year-old husband Travis took his own life.

The KSL morning anchor opened up about his longtime struggle with depression.

“I always thought Travis and I would be married until we were old and our kids were older, and had their own families and we’d have grandchildren,” Prichard said. “Now I look at myself, and I am a single parent. I’m raising two children on my own, and it is hard.”

Prichard said her husband never let his family into how he was feeling and that he called the Suicide Hotline the day before he took his life.

“Sometimes I wake up in the morning and think that if I can just get through today, I’ll be ok. We’ll be ok,” she said.

Prichard has returned to work and says the view support has given her family hope and purpose.