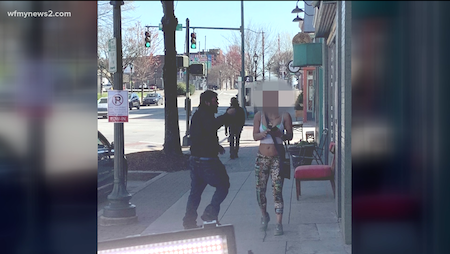 Greensboro, N.C. police are looking for a woman who spat on a WFMY reporter in the downtown area Monday night.

The CBS affiliate says reporter Adaure Achumba and photojournalist Sean Higgins were setting up for a live shot in downtown Greensboro when a woman walked up behind Achumba and shouted in her ear.

The reporter, who was wearing a face shield at the time, asked the woman what she was doing. That’s when the woman threatened Achumba and then spat on her.

Police are investigating the incident as an assault.

“We share this story not only because it happened to one of our own, but because it shouldn’t happen to anyone in a public space,” said WFMY. “Everyone deserves the same level of respect, whether passing by on the street or simply doing their job in a public place.”