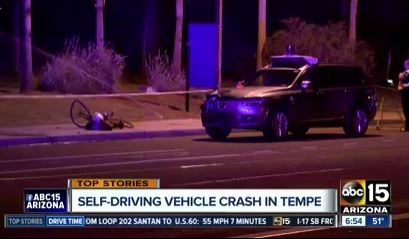 KNXV, the Scripps-owned ABC affiliate in Phoenix, was on the scene this morning covering a fatal car accident in Tempe.

But what makes this accident different, and perhaps historic, is that a self-driving car is to blame. Uber said one of its self-driving vehicles did not stop when Elaine Herzberg, 49, rode her bike into the street, mid-block, not at a crosswalk. She was rushed to the hospital but died from her injuries. This is thought to be the first pedestrian fatality involving an autonomous vehicle. Video from the scene showed the mangled bicycle and an SUV with a damaged front end.

Tempe Police told KNXV the car was in self-operating mode but there was also someone behind the wheel.