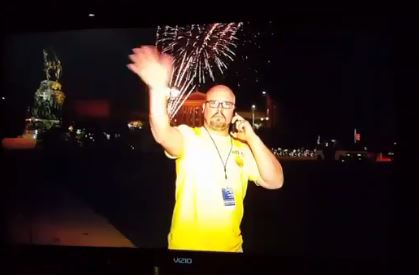 For the second year in a row, viewers took to Twitter after WCAU‘s 4th of July broadcast to express their disappointment.

The Philadelphia NBC affiliate experienced a few technical issues during the two hour live show that cut short because of weather. Tweets from angry viewers showed a videographer testing a shot while the camera was hot.

TVSpy spoke to WCAU’s news director, Anzio Williams today. He told us the technical hiccups were the result of a live show with various remote locations and cameras.

“We are proud of our team’s work during Tuesday night’s live broadcast of the Wawa Welcome America concert. While the rain presented some challenges, it did not dampen the spirit of the fans who weathered through it with us and enjoyed Mary J. Blige and the fireworks.”

Williams also pointed out that the station led in the ratings in the Philadelphia market during the 10pm and 11pm hour that night.

Last year, the station caught heat from viewers because it ran coverage from New York’s Independence Day celebrations and not the local one.

And the award for worst production of a live event goes to NBC10 for their fireworks on coverage.