NEXT:Tampa Anchor Is a Victim of Cyberbullying, After Being Misidentified in Racist Rant
PREVIOUS:Indy Sports Anchor Jason Spells Leaves for Dallas 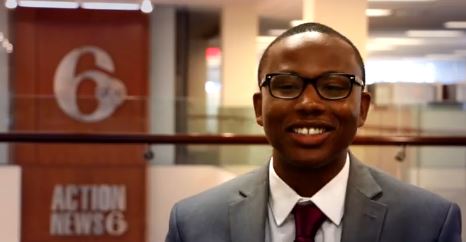 Robert Johnson had a dream when he was just 2 years old. He wanted to work at WPVI in Philadelphia.

“I would just hear the action news theme song. That iconic music, legendary opening,” he said. “I’ve listened to it a thousand times and it never gets old.”

And this summer, he got the chance to live out his dream. The Penn State University student accepted an internship position with the ABC station in Philadelphia.

WPVI produced a video flashing back to Johnson’s first time pretending to be an Action News anchor for an elementary school project, when he appeared in 6ABC promos and how he was inspired to follow his dream to be a meteorologist because of legendary anchors Rick Williams, Monica Malpass and Cecily Tynan.

Johnson was recently recognized as the best student TV newscaster in the country.

You can watch his full story below.