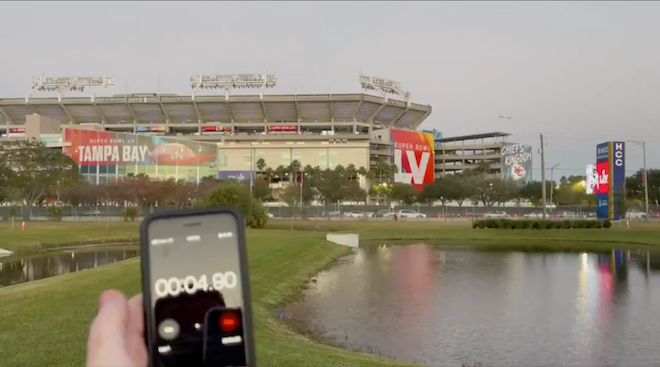 Making a bet on the length of the National Anthem is one of many novelty bets fans take during the Super Bowl, and according to ESPN, the over/under on this year’s national anthem was around two minutes.

ESPN reports Maskavich’s friends had been asking him to keep an eye open for anything to get an edge for bets on “everything from what color of Gatorade the teams were using, to tidbits about the pregame and halftime musical performances.” So the Orlando, Fla. NBC affiliate MMJ saw an opportunity Sunday and posted a recording of a 2-minute, 16-second anthem being rehearsed by performers Jazmine Sullivan and Eric Church to Twitter at 6:30 p.m. ET.

“I had a feeling it was going to gain some traction, leading up to the Super Bowl, and people liking prop bets,” Maskavich told ESPN. “But I didn’t think it was going to blow up like it did. People are reaching out to me, wondering if Vegas paid me to do it, and all these other crazy shenanigans.”

Several sportsbooks noticed a spike in interest, and some even had to halt betting.

“Just about every year there is a leak on the national anthem, and we see a wave of one-sided action a few days before the game,” Dave Mason, Betonline’s brand manager, told ESPN. “Yesterday that wave of action was more suspicious than previous years. Within a few seconds we took about two dozen max bets from sharper accounts. They kept betting over from 2:00 up to 2:10. At that point we knew there was some very strong intel out there somewhere, so we decided to take the odds down.”

Alright gamblers. Here is the timer on the practice of the National Anthem. 2:16 #SuperBowl #GoBucs #ChiefsKingdom pic.twitter.com/CpJC4gHUPp