NEXT:Dallas Traffic Anchor Goes Makeup-Free, Says 'It Should Be a Choice'
PREVIOUS:On the Move: Feb. 20 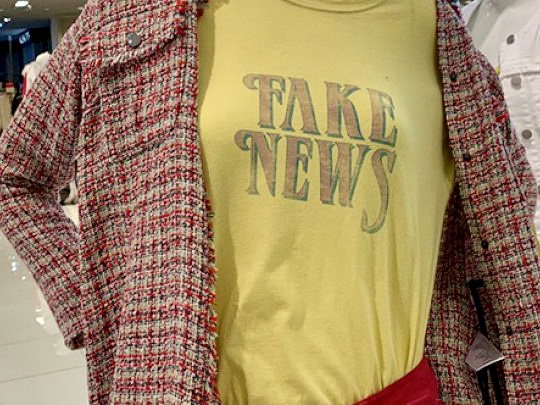 Reporters have had it with the phrase “fake news” and so it’s not surprising that WPIX reporter Allison Kaden went the extra mile when she saw a mannequin wearing a shirt with those words on it.

Kaden was in a Bloomindale’s store in White Plains, N.Y., when she spotted the yellow “fake news” T-shirt. She immediately took to Twitter to call out to retailer for fueling the harmful rhetoric.

“@Bloomingdales, this isn’t funny or fashionable. It further delegitimizes hard working journalists who bring REAL news to their communities,” she wrote.

The tweet got thousands of retweets and comments. Keith Olbermann among other journalists also picked up the story and offered their opinions of the mannequin’s outfit.

On Monday, Bloomingdale’s responded and said they are directing the store to remove the T-shirt.

Thank you for bringing this to our attention and we apologize for any offense we may have caused. We take this feedback very seriously and are working quickly to remove this t-shirt. Again, thank you for taking the time to alert us.