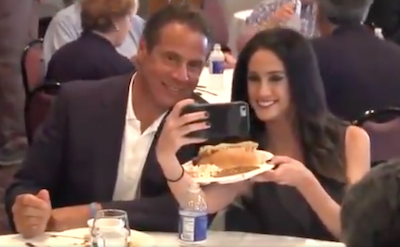 News 12 Westchester reporter Beth Cefalu denies New York Gov. Andrew Cuomo was being inappropriate when he encouraged her to eat a sausage sandwich during the 2016 New York State Fair.

Fox reports Cuomo was harassing Cefalu, and reported that the video shows Cuomo “questionably pressuring a female reporter to eat an entire sausage sandwich in front of him.” But Cefalu disagrees.

“I was not pressured/harassed this is two people enjoying the one event – the NYS fair – that gives them a little more freedom to be informal,” Cefalu wrote on Twitter. “Its really sad it’s being turned into anything more.”

Cefalu continued: “This is why people hate ‘the media’ misleading headlines and one-sided articles twisting reality. It’s really sad that any media will turn fun at the fair into some sleazy scandal that it wasn’t. PS – thanks @FoxNews for speaking for me 👌🏻 very professional.”

Here’s the video that surfaced on Twitter before being picked up by Fox:

Fox has amended the story, adding in Cefalu’s reaction. Click here to view.