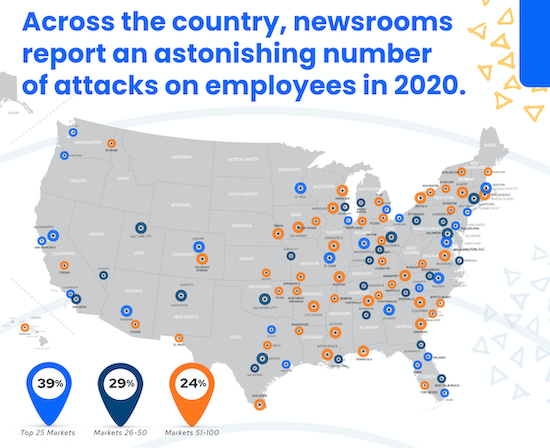 Reporting the news got more dangerous in 2020, according to recent study by the Radio Television Digital News Association and The Newhouse School at Syracuse University.

“Journalists were threatened, assaulted and arrested at an alarming rate while on the job,” said the RTDNA. “We faced unprecedented levels of verbal and physical violence at the hands of civilians, police and the leaders we are meant to hold accountable.”

The findings show that one in five TV news directors reported an attack on employees in 2020. Those attacks range from being hit with pepper spray, being surrounded and threatened during civil unrest and having equipment stolen at gunpoint.

While more than half of the attacks occurred during periods of civil unrest, protests, marches, rallies or riots, 15% were seemingly random.

The study also says attacks are more likely in bigger markets, and that reporting is more dangerous in the west, regardless of network affiliation.

The study shows that 86% of news directors are protecting employees by changing their approach to newsgathering. Some of the measures include eliminating the MMJ position and covering stories with a team, providing situational awareness training, buying bulletproof vests and gas masks, and having security teams go into the field with crews.

“This data makes clear a reality that many journalists have already recognized—we are under attack,” said the RTDNA. “It is a journalist’s constitutionally protected duty to serve the public by seeking and reporting the truth, but this protection alone has proven inadequate. The proof is in the numbers.

The RTDNA is calling on Congress to act. Its website has a link to a petition to “demand that the U.S. government prioritize the safety of journalists across the country.”