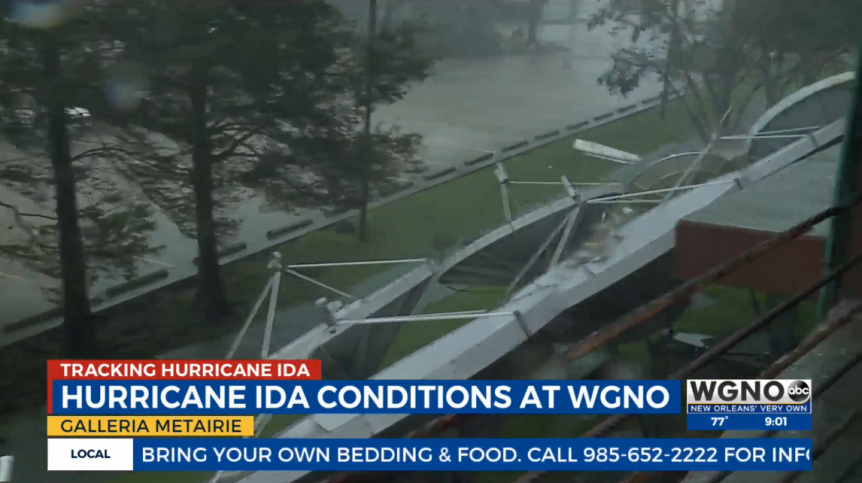 New Orleans ABC affiliate WGNO joined the thousands of residents in Louisiana who were affected by Hurricane Ida on Sunday.

More than a million residents are still without power after Ida made landfall in Louisiana Sunday, bringing 150 mph winds and reversing the flow of the Mississippi River.

WGNO, which is on the eighth floor of a 29-story tower called The Galleria in Metairie, La., was hit hard by the Category 4 storm, and whipping winds caused serious damage to the building. In a video taken by the station, reporter Kenny Lopez took viewers through the damage. At one point in the video you can see a piece of The Galleria tear off and hit a WGNO satellite dish.

Other staffers also showed their own behind-the-scenes look at the damage. In a TikTok video posted Monday, meteorologist Scot Pilié showed a section of the station’s walls and roof ripped off in the wind.

Inside the station, water streamed in through ceiling tiles. Reporter Anna McAllister tweeted out video of staff using buckets to catch the water leaking from the ceiling.

Happening at @WGNOtv from #HurricaneIda — we’re still on the air, bringing you the information you need to stay safe pic.twitter.com/stYPwSgmtL

Watch the entire video detailing the damage to the station below.