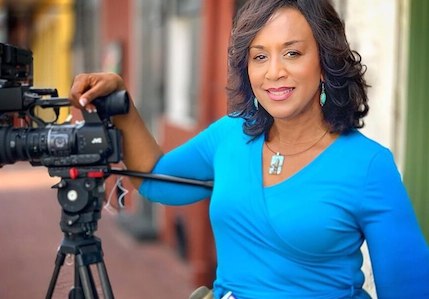 Parker, 53, was working on a story about a stunt pilot on Friday afternoon when the plane in which the two were flying crashed. The pilot, Franklin Augustus, was also killed.

The New Orleans Fox affiliate says Parker had anchored every prime-time newscast during her 23 years at the station.

The station issued a statement:

Today we mourn the loss of our longtime colleague and friend Nancy Parker. Details have not been released by authorities, but we can confirm she passed away in plane crash while covering a story at the New Orleans Lakefront Airport.
“Nancy was absolutely a joy to work with each and every day”, said FOX 8 Vice President and General Manager Tim Ingram. “Today we lost a wonderful journalist and remarkable friend, the New Orleans television community lost a true treasure, but beyond that, her family lost a wife, a mother and daughter. Our thoughts and prayers are with them.”
Nancy was a part of the FOX 8 family for the last 23 years, she put her heart and soul into her work, covering thousands of stories and touching countless lives. She made a difference in the lives of those she reported on. She will be sorely missed, and her absence creates a void that cannot be filled.

Parker’s husband Glynn Boyd, a former journalist and current PIO for the Jefferson Parish Sheriff’s Office, posted a tribute to his wife on Facebook. The couple has three children.