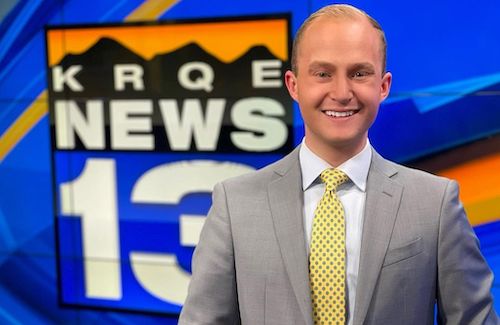 KTAB-KRBC news director Travis Ruiz congratulated Tosterud on LinkedIn by saying “Shamelessly, I will say he was one of my first hires as News Director!”

Tosterud joined KRQE from KTAB-KRBC in 2019. He replaces Mark Ronchetti, who resigned as chief meteorologist in October to consider a run for governor of New Mexico.

In a Facebook post announcing the news, Tosterud said he’s wanted to be a meteorologist since he was 8.

“I could never imagine that in a little over 4 years I would go from Weekend Meteorologist/Reporter in TV Market 165 to being Chief in a Top 50 Market, but I worked for it and I am so proud of my accomplishments,” he said. “Weather is my passion, and I am beyond thrilled to continue forecasting and telling the weather in the most beautiful state in the country. I look forward to continuing my career here in New Mexico.”

“Congratulations to Grant Tosterud who was just named the CHIEF METEOROLOGIST at Nexstar’s KRQE,” wrote Ruiz. “I am so proud of Grant! I am also proud that Grant started his career as Meteorologist at KTAB/KRBC in Abilene.”