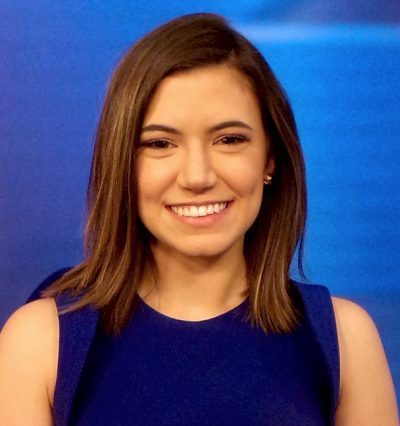 WBBJ weekend meteorologist and college student Shaley Dawson is getting an education on the darker side of TV news.

Dawson, who expects to graduate from the University of Tennessee at Martin this year, posted a tweet responding to what looked like an unkind message from a viewer.

“You are a terrible meteorologist,” read the note. “I told you on December 26, you speak too fast. You are not improving in giving us the weather. Shame on WBBJ for hiring an incompetent bimbo. You still talk too fast. Are you stupid?”

In response Dawson tweeted, “Just a reminder, it’s 100% free to be a nice person.”

“I have only been doing this for 2 months,” she wrote in her response. “I am not perfect. I make mistakes. I am still learning. I am not an incompetent bimbo. Treat me with the respect I deserve. Even if I make mistakes.”

We emailed Dawson about the exchange, but haven’t heard back. 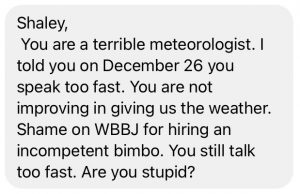 Denver investigative reporter Jeremy Jojola talked to TVSpy about the dark side of social media after he decided to get off Twitter a few months ago.

“There’s really no guide on how to deal with it,” Jojola told TVSpy. “I’ve been the subject of an online mob several times—it’s not fun and sometimes it can feel you’re lost in an angry sea.”

Dawson, for her part, said in a follow-up tweet  that the note is unfortunately not the only one she’s received.

“This isn’t the first time this has happened,” Dawson wrote. “I get these messages every other day. People have gone as far to message my personal Facebook account when I don’t reply to them on my met page. I am on air on Saturdays and Sundays and still these receive messages when I’m not working.”