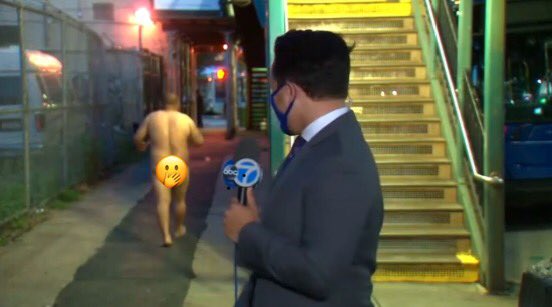 A lot happens before the sun comes up. And when you’re reporting in the morning, sometimes you witness these things live.

WABC reporter Derick Waller saw something that many people don’t want to see in New York City before sunrise—or ever. A naked man walked through his live shot on Fulton Street in Brooklyn.

“There was a full moon on Fulton Street … also a naked man in my shot,” Waller said.

Waller and the Eyewitness News team narrowly avoided airing the encounter, Waller said. “If you had tossed to us 30 seconds earlier, you would have seen a totally naked man walking down Fulton Street—he wasn’t even wearing shoes,” Waller tweeted at Eyewitness News anchors Mike Marza and Shirleen Allicot.

Waller said the man was taken into an ambulance shorty after. “I hope he’s OK, ” he wrote. “Looks like he is getting the attention he needs.”

There was a full moon on Fulton Street … also a naked man in my shot. 😬 pic.twitter.com/RvPOIzuVlQ