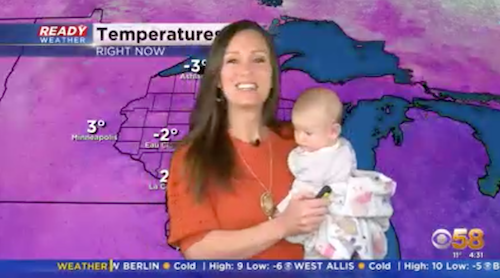 WDJT meteorologist Rebecca Schuld had some help during a recent weather forecast.

During the Noon newscast, the Milwaukee CBS affiliate’s meteorologist promised viewers her daughter Fiona might join her for a Facebook live after the show, but Fiona had other plans, namely a nap. So the pint-sized meteorologist-to-be appeared in her mother’s arms for the 4 p.m. newscast.

“Delivering bad news in the weather is made better with a baby in hand,” Schuld wrote on Facebook. “Fiona makes her official in person tv debut to let viewers know it’s our first area wide Wind Chill Advisory of the season. Snuggle buddy needed tonight!”

“You’ll have to excuse her bedhead, she just got up from her nap,” Schuld told viewers.