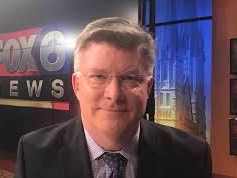 The main anchor at WITI in Milwaukee has been off the air for the last week after being suspended over an ill-advised joke.

Ted Perry, who anchors the Fox station’s 5 and 10 p.m. shows, was suspended for a joke he made on Facebook, according to the Milwaukee Journal Sentinel.

Trebek, the longtime host of Jeopardy!, died on Nov. 8 at age 80. Meanwhile, McConnell was elected to his seventh term in the U.S. Senate earlier this month and has been serving as Senate Majority Leader.

Perry came under fire from conservative for the comment, and he has since deleted his Twitter account and personal Facebook page. Station sources told the Sentinel he would be out for at least a week.

Perry, who’s been with the station since 1993, also posted an apology.

“I made a statement on my personal Facebook page that was insensitive and does not reflect my journalist values and I was not speaking on behalf of my employer,” he wrote.