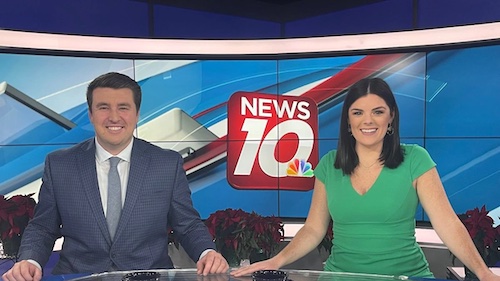 Starting Monday, the morning show will be anchored by Maureen Halliday and Seth Wells, who will also anchor the 11 a.m. midday newscast.

David Andrews, who has been filling on the morning desk, will going back to the evenings as co-anchor of the weekday 5 p.m. and 11 p.m. newscasts, alongside Ann Emmerich. The only team member staying on the morning shift is chief meteorologist Darrin Rockcole.

“It’s been a wonderful two months of filling in on News 10 Today alongside Darrin Rockcole, but now it’s time to turn over the keys to the anchor desk to Seth and Maureen,” said Andrews. “Their shining personalities and professionalism will be a winning combination for the morning news audience!”

Halliday, who is also a weekday reporter, makes the move after two years of anchoring weekends. The station said she’s earned a reputation for developing excellent original journalism on-air and online.

Wells, meanwhile, joins the station from WOOD in Grand Rapids, where he was a sports anchor and reporter. He’s worked at WILX once before between 2018 until 2020.