NEXT:Reporter Jumps From Dayton to Indianapolis
PREVIOUS:RTDNA Study Shows Diversity in Newsrooms Up, Lags in Radio 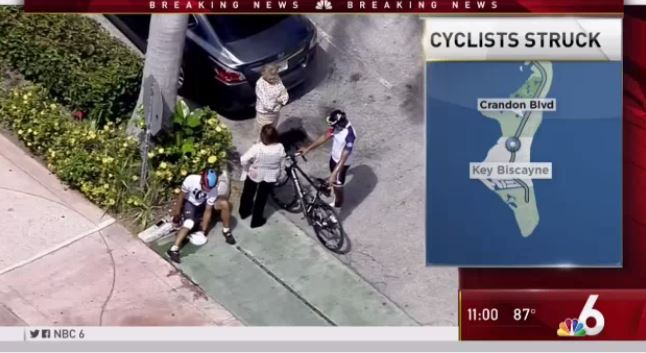 A WTVJ anchor and photographer escaped serious injuries after being hit by a car while biking on Key Biscayne last Friday.

Weekend evening anchor Johnny Archer and photojournalist Shane Walker were riding on Crandon Boulevard, the main road on the small island off downtown Miami, when a driver struck them. The car stayed at the scene.

Archer and Walker were checked by medics and chose not to be taken to the hospital.” Aside from some bruising, they both will be OK,” WTVJ reported during its 11 a.m. newscast last Friday.

Archer’s WTVJ bio reads: “Johnny is an avid cyclist, runner and swimmer and has competed in several triathlons including a half Ironman.” Walker has been with NBC6 for the last two years, according to his LinkedIn profile.